In 1965, Ebony magazine published a 10-page spread about Brazil with the headline, “Does Amalgamation Work In Brazil: Absorbing Negro Through Interracial Marriage Is Their Answer to the Race Problem.”

The top image in the article showed a black woman walking hand in hand down the street with a white man.

“Interracial couple walking hand in hand is not unusual,” the caption read. “But unless the dark girl is the boy’s cultural or economic superior, chances are they will never wed. Black and mulatto men marry white women to improve social status.”

Sadly, not much has changed in Brazil some five decades later.

The 2010 census in Brazil showed that out of all the women over 50 who had never had a spouse, a majority of them were “pretas,” a term commonly used to refer to dark-skinned black women. It’s also obvious to all Brazilians that once black Brazilian men attain a certain social status, they choose white women as their life partners. Brazil’s most famous soccer player, Pelé, has been married three times, but never to a black woman. Nearly all of Brazil’s top male samba singers are married to white women. A study conducted of high-level black Brazilian businessmen in 2011 found that out of the 50 interviewed, 49 were married to white women(pdf).

Black Brazilian actress Polly Marinho, 32, thinks this is a natural outcome in a country that values whiteness on television, in its magazines and in government.

“We are educated to think, like, that black is not beautiful. Black is a slave. Black is not good,” said Marinho, who recently starred in a popular television show on Brazil’s largest television network. “Let’s take, for example, a very famous black soccer player. When they want money, they want good things. A beautiful house. A Ferrari and a white, white, blue-eyed chick."

When Marinho lived in New York for two years, she was surprised to see well-off African-American men seriously dating black women because it just doesn’t happen in Brazil. Although her acting career is booming in Brazil, she longs to return to New York for the plethora of acting opportunities and the black men.

“[Black American men] can [have sex] with the rich white girls,” Marinho said. “But the girlfriend is black.”

But even if successful Afro-Brazilian women and men wanted to date each other, it would be difficult. The worlds they live in, study in and work in are not black.

“The black middle class lives in an environment where a majority of the people are white,” said Fábio Chaves, a blogger who runs the site "Black Men And Women With A Lot Of Pride". “And in Brazil, and I believe in the world, we give preference to relationships with people who see us eye to eye, so it’s not just a question of color, but mainly the general social relationship."

Going Against the Tide

Humberto Baltar is unique in Brazil. He’s a college-educated black man who owns his own English-language-instruction company. The 34-year-old earns a salary that puts him in the upper part of middle class. Despite this, Baltar, who lives in Rio de Janeiro, has chosen to exclusively date and marry black women. Baltar says his experience growing up in the house where his mother worked as a maid made him aware of racism in Brazil. Although his mother’s employer, a white woman, considered him part of the family, he always had to ask permission to get water or to turn on the TV.

“This kind of life made me aware from childhood that something was different,” he said. “I didn’t have the same treatment in the way they used to treat their kids. These little things made me see that we are not seen equally by whites.”

Baltar dated a college-educated blond woman fresh out of college more than a decade ago. He enjoyed the relationship, but he was disturbed by the stares he received from her white family when he spent time with them. Now Baltar encounters another problem with his black girlfriend: stares from people who are not used to seeing all-black couples in nice places. These restaurants are usually filled with white and mixed couples, he said.

"From the moment we come in, till the moment we leave a restaurant, people keep staring,” Baltar said. "My conclusion is that the problem in their minds is that black families offend them. I don’t know why. I don’t see the same reaction to interracial couples.”

Black couples are rarely seen in media, too. One poster for a new film shows three different couples, a black woman and white man, a white couple, and a white woman and a black man.

Do the Statistics Tell a Different Story?

Despite Brazil’s reputation for interracial dating and marrying, race is still the predominant factor in choosing a marriage partner—70 percent of Brazilians marry within their race. This number hasn’t changed in the last 10 years, but in 1980, the number was 80 percent, meaning that today, 30 percent of Brazilians are in interracial marriages. By comparison, most recent data shows that 15 percent of all new marriages in the United States are between spouses of a difference race or ethnicity.

But these statistics don’t tell a complete story for black women or well-off blacks.

The book Race In Another America: The Significance of Skin Color in Brazil found that in 5 out of 6 interracial marriages, the black spouse has the superior socioeconomic status. This suggests that when black people intermarry with white people, they are exchanging their “inferior” race and superior socioeconomic status with a white person of lesser means. There’s a value applied to women based on their color, and data suggests that black women have the least value. Black women have the least options and spend the least time married.

Are Black Women Being Left Behind?

Claudette Alves, a black professor based in Sao Paulo, conducted a study to find out if love truly has no color in Brazil. She laid out the results in her 2011 book, Virou Regra: Becoming the Rule. The book’s title and book cover imply that marriage between black men and white women is becoming the rule rather than the exception.

In a you tube interview with Brazil’s most famous black actor, Lazaro Ramos, Alves said that her research of 1,435 interracial marriages in every level of society in Sao Paulo revealed that this preference crosses classes.

“It’s a phenomenon that is in every level of Brazilian society,” Alves said. “It’s a way that black men protect themselves. In history, and in their lives, they are pushed to deny their identity.”

In the final stage of the study, she conducted in-depth interviews with 11 black women. She found that they were sad and frustrated with the status quo.

“They had this feeling of sadness and they were revolted,” she said. “But they have hope that black men in Brazil will liberate themselves from this rule.”

This is also a good book that details what is happening all throughout the diaspora: 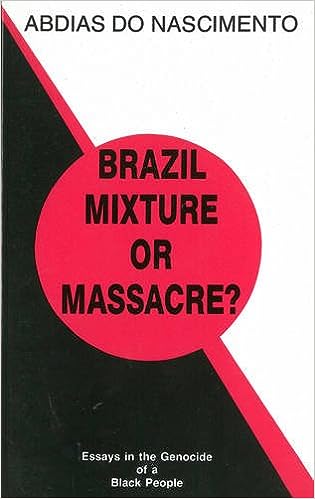 EBONY is archived at Google.. You can read the original article here:

There was also a Part II of the article and also some letters from readers. Check it out: