Black People : Under the New Law , Dr King Would have been Placed in Military Detention without Trial 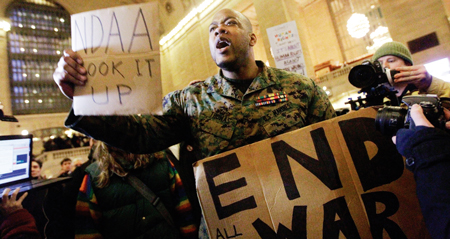 
(FinalCall.com) - On January 22, 2009, newly inaugurated President Barack H. Obama proudly issued his first three executive orders, one of them, a directive requiring the infamous Guantanamo Bay prison facility to be closed within one year.
Nearly three years later, Guantanamo Bay remains open with prisoners being held without trial, and a new law enacted with the stroke of his pen could mean more American citizens will be joining them soon. 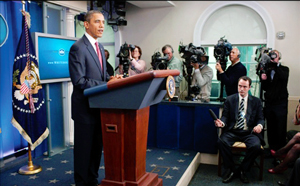 With people partying worldwide in naïve bliss on New Year’s Eve, December 31, Pres. Obama signed into law the National Defense Authorization Act giving the military extraordinary sweeping powers to detain United States citizens indefinitely without trial. The law has been widely condemned by civil libertarians, activists, and American citizens who see this as further evidence of the erosion human rights, which began post 9/11 under then-President George W. Bush.
“The fact that I support this bill as a whole does not mean I agree with everything in it. In particular, I have signed this bill despite having serious reservations with certain provisions that regulate the detention, interrogation, and prosecution of suspected terrorists,” said Pres. Obama in a statement.
Ironically, when Pres. Obama issued the order to close Guantanamo Bay in 2009, he said he desired to “restore the standards of due process and the core constitutional values that have made this country great even in the midst of war, even in dealing with terrorism.” His signing the NDAA into law does exactly the opposite, and critics believe America has witnessed one of the most tragic reversals of civil liberties in its history.
“President Obama’s action today is a blight on his legacy because he will forever be known as the president who signed indefinite detention without charge or trial into law,” said Anthony D. Romero, executive director of the American Civil Liberties Union. “The statute is particularly dangerous because it has no temporal or geographic limitations, and can be used by this and future presidents to militarily detain people captured far from any battlefield.”
During a Jan. 9 in studio interview with radio host Cliff Kelley of WVON 1690AM in Chicago, The Honorable Minister Louis Farrakhan delivered his thoughts on the NDAA in response to a question posed by a caller.
“That act signed into law by our president is an act that is destined to stop those of us who speak truth to power,” said Min. Farrakhan. “It’s aimed primarily at a man that they know they have not been able to control. So I warn the government—you can do what you want with me—but Farrakhan is going to be found being faithful to the truth that will free the minds of our people, and whatever the consequences, I warn you, when you come after me, God will come surely after you,” he added.
Despite the White House spin, there is no way around it, this law curtails freedoms, has disappointed his supporters, and opens the door further for abuse.
The xenophobic and islamophobic rhetoric spewed from the mouths of several leading Republican candidates for president has raised the possibility that while Pres. Obama claims he will not use the law to indefinitely detain American citizens, future presidents could use the act he signed into law, to do exactly that.
Critics cite this as a key concern because according to political analysts, Pres. Obama’s reelection in 2012 is not guaranteed.
Polling data from Real Clear Politics shows 70 percent of the American people think the country is on the wrong track. American displeasure with the economy could cause a majority of voters to vote for a change in direction. Additionally, many liberal voters who supported Mr. Obama as the candidate for “change” in 2008 have been disappointed as he has hawkishly increased America’s global militarism after winning the Nobel Peace Prize in 2009. 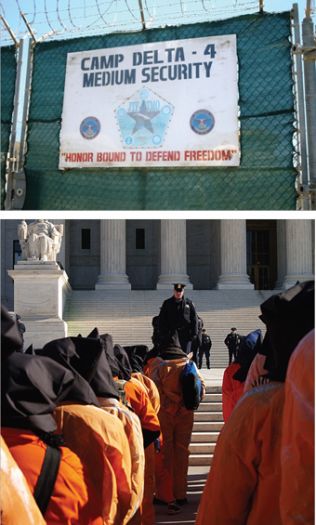 (Top) The sign for Camp 4, the medium security facility within Camp Delta at Naval Station Guantanamo Bay, Cuba Photo: MGN Online (bottom) Protestors in black hoods and orange jumpsuits in front of “The Contemplation of Justice” statue at the International Day To Shut Down Guantanamo Bay in Washington, D.C. January 11, 2007. Photo: takomabibelot/Flickr.com

Attorney Abdul Arif Muhammad, General Counsel for the Nation of Islam and the Honorable Minister Louis Farrakhan read the entire bill paying special attention to the wording in sections 1021 and 1022, the most controversial parts dealing with those subject to military detention. Although the wording seems to suggest American citizens would not be covered, it leaves the door open should another president come into office with another interpretation, he added.
“It is important to note that President Obama himself upon signing the bill, issued a three page presidential policy statement specifically raising concerns about the constitutionality of those provisions, especially as they relate to American citizens. As the commander-in-chief, the bill authorized him to promulgate regulations to implement the law. He specifically says in his presidential statement that he would not promulgate and implement any rules or regulations that would specifically impact American citizens and their constitutional rights,” Atty. Muhammad continued. “The mere fact that he had to make this statement upon signing the bill is clear evidence of problems with the law.”
What also has many disturbed is that after originally saying he would veto the bill, Pres. Obama quickly signed it into law, forcing critics to wonder if he will keep his word relating to not using the law to indefinitely detain citizens. 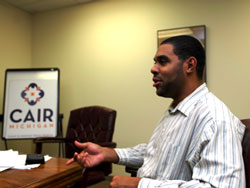 “It’s not that I believe that the president is disingenuous, but there’s been a number of times during his presidency where he has quickly changed his position based on minimal political pressure,” said Dawud Walid, executive director of the Michigan chapter of the Council of American Islamic Relations. “If he said he was going to give people in Guantanamo Bay due process and civilian trials, and then backtracked on that, he’s already set a precedent for me to think that he could backtrack on his written promise regarding NDAA.”
http://www.finalcall.com/artman/publish/National_News_2/article_8505.shtml

Now, on the heels of the NDAA, a new bill is making its way through Congress: the Enemy Expatriation Act that would make the controversy about the NDAA null and void by simply stripping Americans of their American citizenship, should they be accused of associating with government-deemed terrorist organizations.
What the outrage over the NDAA and now the Enemy Expatriation Act, reveal, however, is not that Obama or the current members of the House are suddenly taking the American government in a startling new direction, but merely that they are in fact continuing to pursue a coordinated policy agenda that has persisted through administration after administration on both the left and right sides of the political aisle for decades.
In 1864, during the American civil war, Lambdin P. Milligan and four others were sentenced to death by a military court after they were found guilty of planning to overthrow the state governments of Indiana, Michigan, and Ohio. The case reached the Supreme Court after the war ended, where it was found to be unconstitutional for US citizens to be tried in military tribunals as long as civilian courts were operating. This precedent remained in tact for almost a century, with the Posse Comitatus Act of 1878 further delineating the boundary between the military and civilians by barring US military from engaging in civil police actions except by act of congress.
In 1942, however, the Supreme Court ruled on Ex Parte Quirin, a case involving the detention of eight German saboteurs during World War II and their trial as civilians in a military tribunal. The court ruled that the eight men, one of whom was a US citizen, could be tried as ?unlawful combatants? in the war, a status applying to civilians who engage in armed conflict during times of war.
Unsurprisingly, it is this Ex Parte Quirin decision allowing for the military detention of civilians, not the Ex Parte Milligan precedent, which both the Bush and Obama administrations have relied on to try to assert their authority to detain civilians as unlawful combatants in the so-called war on terror. In the immediate wake of the 9/11 attacks, Congress passed an Authorization for Use of Military Force which authorized the President to ?use all necessary and appropriate force against those nations, organizations, or persons he determines planned, authorized, committed, or aided the terrorist attacks.? Less than two months later, Bush invoked that authorization to issue a Military Order declaring that individuals detained in the war on terror be tried in military tribunals. The administration immediately began applying this order to detainees in Afghanistan, regardless of affiliation.
The practice of detaining these ?enemy combatants? at Guantanamo Bay and other military detention centers has been challenged repeatedly in the courts. When the Supreme Court finally ruled in Hamdan v. Rumsfeld that the detainees could not be held as unlawful enemy combatants but had to be held as prisoners of war in accordance with the Geneva Conventions, Congress passed the Military Commissions Act of 2006 specifically authorizing military commissions for the detainees.
In 2008, the Supreme Court ruled that Guantanamo prisoners were entitled to the US justice system, but in 2009, Obama Attorney General Holder and Solicitor General Kagan testified that they believed the government could detain combatants in accordance with the laws of war, thus sidestepping the issue of determining a prisoner?s status or their right to trial.
Now the NDAA of 2012 seems to extend all of these precedents and provisions to US citizens. This comes in addition to Peace Prize laureate Obama?s stunning declaration that he has the right to kill American civilians anywhere in the world, without so much as a trial.
Perhaps most worryingly of all, when Obama expressed reservations about the NDAA, it was not because he as a Constitutional scholar felt the idea of using the military to detain American citizens on American soil was an unconscionable abrogation of everything the US constitution and Bill of Rights stood for, but because he felt that the 2001 Authorization for Use of Military Force had already granted him this power as supposed Commander-in-Chief in the supposed War on Terror, which has never actually been declared. 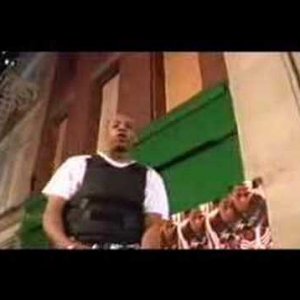