Black People : The scandal of the Alabama poor cut off from water 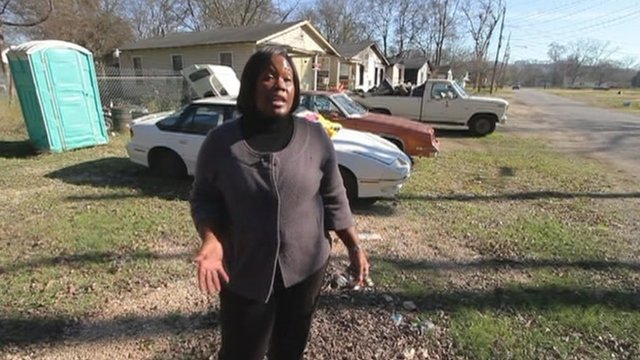 Sheila Tyson, a community activist in the deprived West End area of Birmingham, tells the BBC how her community has been affected

Banks stand to lose millions of dollars in debt repayments if the biggest municipal bankruptcy in American history is allowed to proceed.

But the real victims of the financial collapse in the US state of Alabama's most populous county are its poorest residents - forced to bathe in bottled water and use portable toilets after being cut off from the mains supply.

And there is widespread anger in Jefferson County that swingeing sewerage rate hikes could have been avoided but for the greed, corruption and incompetence of local politicians, government officials and Wall Street financiers.

Tammy Lucas is the human face of a financial and political scandal that has brought one of the most deprived communities in America's south to the point of what some local people believe is collapse.

Mrs Lucas's monthly sewerage rate bills - the amount levied by the county to flush away waste and provide water for baths and showers - has quadrupled in the past 15 years. She says it is currently running at $150 (£97) a month, which leaves little left out of her $600 social security cheque for food and electricity.

"We need to keep the water running because we're women," she says. "We need to take baths. I try to pay the sewer bill and the water bill together and then what little I got left I try to put on my lights. I got to have lights."
'Just outrageous'
Her neighbour in one of the poorest districts of Jefferson County's largest city, Birmingham, a father of four who asked not to be named, has already made that choice. 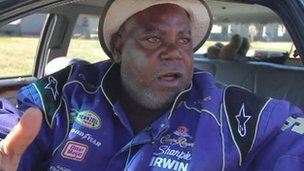 The poorest citizens in Birmingham, Alabama, say they can no longer afford running water

His modest rented home, next to a busy freight train line, is one of a growing number in the area that now has a blue portable toilet next to it.

He says he finds it cheaper to buy drums of water from a petrol station and pay a sanitation company about $14 a month to remove waste from his "porta-potty" than pay the combined sewer and water rate bill, which some months can reach $300.

"Most people who live here are on social security," he said.

"They can't spend this kind of money on sewerage. It's just outrageous. It's too high.

"I pay my sewerage bill, then I'm going to slack on my groceries. Then what am I going to eat?"

That has happened with the so called public private partnerships, like in Newark NJ, but the sad fact of the matter is they plan to market water the way gas is and start charging folks in their apartments for it. Water has gone up a least by a third here in NYC 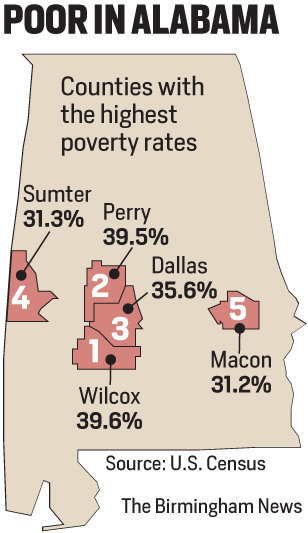 MONTGOMERY, Alabama -- More than one in four Alabama children live in poverty -- a figure that has jumped since the recession began in 2007, the U.S. Census Bureau said Tuesday.
In 2010, 27.4 percent of children age 18 and under in Alabama lived in poverty. The percentage was 23.6 percent in 2007.
"I would call it a significant jump," said Linda Tilly, executive director of VOICES for Alabama's Children, an advocacy group. Tilly said the 2010 figure is high even for a state that historically has been plagued by poverty.
Alabama has struggled with generational poverty, which means families generation after generation have been poor. But now, Tilly said, job losses because of the rough economy are pushing new families below the poverty line.
"Now we are adding a new group to poverty because of the economy. Families who have not traditionally been in poverty are now joining that group," Tilly said.
Suburban counties had the highest median households incomes and lowest rates of child poverty, in the new Census report. Alabama's Black Belt counties were largely nestled at the bottom of the rankings.
Shelby County had the lowest child poverty rate in 2010, at 13.2 percent; followed by Autauga County, at 17.5 percent; and Madison County, at 18 percent.
Dallas County had the highest child poverty rate, at 56.5 percent. Perry County was next, at 54.3 percent. The counties had the third- and second-highest rates, respectively, for poverty among all ages.
Shelby County had the highest median household income in the state, at $67,135. Madison County was next, at $54,633; and third was Autauga County, at $53,049.
Wilcox County had the lowest median household income, at $21,611. Next to last was Perry County, at $24,742.
Nationally, the poverty rate for school-aged children increased significantly in 20 percent of U.S. counties between 2007 and 2010.
Nearly one in five, or 19.8 percent, of school children were living in poverty in 2010, the Census report said.

We are not a monolith but we as a people are one family wherever Black folks are on the planet and an injury to one is an injury to all.

But the issue of water whether nationally or land grabs of rivers and lakes in Africa, is something that requires great thought literally for our collective survival.

We can economically collectivize for food, clothing and shelter and utilities, but what can we do for water? Can we collectively purchase water resources or does it take strategic political action?

Published on Sunday, December 18, 2011 by the Austin American Statesman

by Jeremy Schwartz and Eric Dexheimer
PFLUGERVILLE — When Robert White opened his water bill last month, his jaw dropped: $250 for a month's worth of water and sewer service. The 63-year-old construction contractor, who shares a three-bedroom home with his wife in the bucolic Springbrook Centre subdivision, said he likes to keep his lawn green and expects hefty water bills. "I just don't want to be hijacked," he said.
White's water service is provided by a private utility owned by California-based SouthWest Water Co. LLC. Just across the four-lane Pflugerville Parkway, where White's neighbors in the Springbrook Glen subdivision — a nearly identical grid of neatly arranged brick-faced homes — get their water from Pflugerville, rates are on average about 60 percent less.
And White's bill for water service may nearly double soon, if SouthWest Water gets the latest rate increase it has requested. "I have never felt so helpless," he said.
He's not alone. Across the state, a growing number of suburban Texans are getting their water from large, private corporations owned by investors seeking to profit off the sale of an essential resource. State figures show private companies are seeking more price increases every year, and many are substantial.
The Texas Commission on Environmental Quality, which regulates water and sewer rates for nonmunicipal customers, doesn't keep numbers, but "their rate increases tend to be 40 and 60 percent," said Doug Holcomb, who oversees the agency's water utilities division. 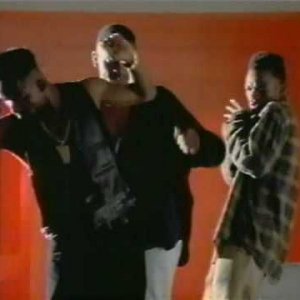