Protestant and Roman Catholic (as well as some Anglican, Lutheran and Eastern Orthodox) views on Mary, the mother of Jesus, differ greatly because of the non-Biblical dogmas, doctrines and traditions the Catholic church attach to her.

Now, I didn't listen to the entire video; but the following is what I know of some of the beliefs about Mary held by the Roman Catholic church:

(A) Mary is proclaimed an "Immaculate Conception," meaning that Mary was conceived without the stain of original sin.

(A) After Adam and Eve were cast out of the Garden of Eden, all of humanity became "born of sin." Mary was no exception. She was favored and blessed by God as His VESSEL to give birth to the living Word, Jesus; but no where does the Bible say that Mary was without sin. The only one without sin is Jesus. The only "IMMACULATE CONCEPTION" is JESUS, not Mary.

Matthew 1:
[24] Then Joseph being raised from sleep did as the angel of the Lord had bidden him, and took unto him his wife:
[25] And knew her not till she had brought forth her firstborn son: and he called his name JESUS.

Matthew 13:
[55] Is not this the carpenter's son? is not his mother called Mary? and his brethren, James, and Joses, and Simon, and Judas?
[56] And his sisters, are they not all with us? Whence then hath this man all these things?
Click to expand...

(C) The only intercessor/mediator is Jesus and His Holy Spirit. In John 14:6, Jesus said, "...no man cometh unto the Father, but by ME."---Jesus is the Savior of the whole world, including his mother.---Jesus also said that, in prayer, we should ask it IN HIS NAME, not His mother's name.....When Jesus taught how to pray, He didn't say anything about His mother. ---"Our Father, which art in Heaven...." (Again, no mention of Mary.)

(D) No titles are given to Mary in the Bible. The Bible does not state any heavenly "prestige" for Mary.---Even when James and John asked Jesus if they could sit on his right and left side in heaven, Jesus said:

Mark 10
[40] But to sit on my right hand and on my left hand is not mine to give; but it shall be given to them for whom it is prepared.
Click to expand...

Also, as one woman praised Mary as the mother of Jesus, He corrected her:

Luke 11:
[27] And it came to pass, as he spake these things, a certain woman of the company lifted up her voice, and said unto him, Blessed is the womb that bare thee, and the paps which thou hast sucked.
[28] But he said, Yea rather, blessed are they that hear the word of God, and keep it.
Click to expand...

So, no where did Jesus ever give his mother any earthly nor heavenly distinction.

There is no Biblical support that Mary was taken into Heaven when she died.
Moreover, this Catholic belief is unfathomable to me because if Mary, as the mother of Jesus, was so "revered" by God, then why would Jesus let her continue to live after His own ascension to Heaven and not take His mother with him??

I mean really...Jesus turned water into wine, fed multitudes, healed the sick, gave sight to the blind, made the lame walk, the mute talk, cast out demons, and brought Lazarus back to life; but wouldn't take his own mother with Him??

(By the time of Jesus' crucifixion, Mary was a widow. The Bible does not say when Joseph died.)

So, why would Jesus let his own mother live and suffer under Roman rule and all the tribulations of life until her death and not take her with Him?? ....Instead, when He was on the cross, He, essentially, said, "Mom, I gotta go; but my buddy John is gonna take care of ya."

John 19:
[26] When Jesus therefore saw his mother, and the disciple standing by, whom he loved, he saith unto his mother, Woman, behold thy son!
[27] Then saith he to the disciple, Behold thy mother! And from that hour that disciple took her unto his own home
Click to expand...

Jesus also said that NO MAN (or woman) has ascended to Heaven.>>>

John 3:
[13] And no man hath ascended up to heaven, but he that came down from heaven, even the Son of man which is in heaven.
[14] And as Moses lifted up the serpent in the wilderness, even so must the Son of man be lifted up:
Click to expand...

cherryblossom said:
NONE of these beliefs are Bible-based. They have NO scriptural support.
Click to expand...

Which bible? The kjv or (not) in any bible?

The catholic xians use the douay rheims. Could their be something
in that helio-biblios which justifies considerable reverence being
placed before jesus the christ's momma?

Um how can somebody be the mother of somebody who was NEVER born in the first place?
It's a story. It's 2012 and yet we still believe child bedtime stories like it's 12 A.D.

This doesn't even warrant COMMON SENSE, yet people that believe this will tell you santa claus ain't real, the tooth fairy ain't real, the easter bunny ain't real. But somehow a woman who births a child is still virgin is real.

What is the purpose? Do you help or hurt people? Do you even care? So you can name every "scripture". Is your heart in the right place? They call it a "scripture" because you're following a script, like in a play, movie or being a newscaster. As long as you follow the script, you will NEVER have an original thought. This is NOT by accident. Goodness should come from your actions. Not because you can repeat something somebody else said.

RAPTOR said:
Which bible? The kjv or (not) in any bible?

The catholic xians use the douay rheims. Could their be something
in that helio-biblios which justifies considerable reverence being
placed before jesus the christ's momma?
Click to expand...

The same Books I previously quoted are also in the Douay Rheims.

So, as a Christian believing in the infallible Word of God and that it does not contradict itself, then whatever "support" from the Catholic bible (Douay Rheims) which "justifies" these beliefs to them is false, just as the entire Catholic church is a "false religion."

The KJV has 66 books, the Douay Rheims has 73. The "extras" are the 7 "deutero-canonical" books (also called "Apocrypha" by Protestants) which are not included in the KJV and other Protestant Bibles.
Douay Rheims: http://www.drbo.org/

....The Catholic church likes to say that the Protestants don't have the "whole" Bible, but that they do.

However, if this were true, then they contradict themselves by excluding the Prayer of Manasseh (Psalm 151) and the prayer of Azariah and Esdras 3 and 4. (Esdras 1 & 2 are in the Douay Rheims. They are Ezra and Nehemiah, the same as in Protestant bibles.)

Moreover, these "extra books" in the Douay Rheims even contradict the teachings of the OT and of Jesus in the NT.

However, these beliefs/dogmas on Mary were set by Papal Decrees using verses from these "extra books" to support them and/or by OMITTING or TWISTING other verses to fit the doctrines and traditions of the Catholic church.

In Matthew 13:55, the Douay Rheims supports the "Perpetual Virgin" belief by saying that the "brethren" of Jesus were actually Mary's SISTER'S children. ----But, that would make them his COUSINS, and the Bible clearly uses the word "cousins" in other verses......John the Baptist was Jesus' COUSIN. John's mother, Elizabeth, was Mary's COUSIN----But the Catholic church wants to make the word "brethren" to mean Jesus' COUSINS as well. *Yeah, right.*

[55] Is not this the carpenter's son? Is not his mother called Mary, and his brethren James, and Joseph, and Simon, and Jude:

[55] His brethren: These were the children of Mary the wife of Cleophas, sister to our Blessed Lady, (St. Matt. 27. 56; St. John 19. 25,) and therefore, according to the usual style of the Scripture, they were called brethren, that is, near relations to our Saviour.
Click to expand...

The "Immaculate Conception" of Mary was decreed by Pope Pius IX in 1854.

Wisdom 8:19-20, And I was a witty child and had received a good soul. And whereas I was more good, I came to a body undefiled.
Click to expand...

The "Assumption of Mary" was decreed by Pope Pius XII in 1950. 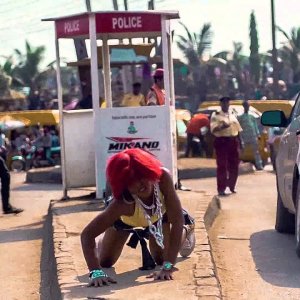