Science and Technology : Mysterious Siberian craters ‘are key’ to solving the Bermuda Triangle

In the Spirit of Scientific Mystery,


Mysterious Siberian craters ‘are key’ to solving the Bermuda Triangle


But now scientists have claimed the giant craters which suddenly appeared in Siberia over the summer may explain the mystery of the Bermuda Triangle. Conspiracy theorists had alleged the holes were caused by meteorites, stray missiles from the Russian army or even as a result of aliens. But experts said they were likely caused by explosions from gas hydrates which also may have led to ships and planes disappearing in Bermuda ...

"When you believe in things, ya don't understand, then you suffer"-Stevie Wonder

Chaya Chaim said:
"When you believe in things, ya don't understand, then you suffer"-Stevie Wonder
Click to expand...

Bermuda Triangle mystery solved? Experts say 'air bombs' sank ships and brought down planes
Some in the science community still disagree saying there is no mystery at all

The mystery of Bermuda Triangle may have been solved according to a new documentary. It blames the "air bombs", which cause fierce winds, for the disappearance of ships and planes inside the "Devil's Triangle" ... 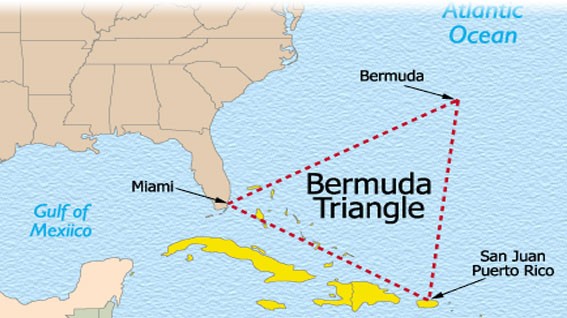 Truth? Conspiracies? A combination of the two? You decide.

This stuff is just the tip of the iceberg.
Click to expand...

Will do mon ami, give me some time to get back after digesting this information, looking forward to it.

Truth? Conspiracies? A combination of the two? You decide.

This stuff is just the tip of the iceberg.
Click to expand...

Good work mon ami, you've connected many dots with the information gathered. However, my interest in topics such as this is only superficial and perfunctory at best. Contradictions of the so-called experts is what fascinated me about this Bermuda Triangle mystery. It could be a testing ground for teleportation devices with HAARP, Chem-trails, Duga Radar and events of the Chernobyl disaster, all being interconnected. But I'll leave it to the conspiracy theorists to figure it all out.

Arianne said:
Me too, my interest peaked when I interned at NASA, I was competing with CalTec & MIT grads holding doctorates in Quantum Physics, Advanced Astronomy & Astrophysics, as a favor to my father I was not rejected but relegated to crunching incoming telemetry data from the still ongoing Voyager 1 & 2 Programs then reassigned to SETI which is like the bottom of the barrel of anything space related & a half step to obscurity so I got a real job at Chipland but I learned a lot about the truth of many things about the value of the control of space. He who wrest control of our atmosphere from the existing government/private consortium will truly dominate this planet. If there's to be a WWIII, it will be over that.
Click to expand...

See, I knew it, you are a Techkie for sure

As far as controlling the atmosphere, other than America, is there anyone else even close to doing that?

Arianne said:
Earth space as we know it which is a part of the outer space system is explained in here, there is no sovereign control, it's shared by any space capable first world nation sharing task in the old MIR & now the ISS & also on deep space probe programs.

The real race for space which is just a PC word for domination of the Earth through the known threat of a capable attack using space based weapons was redirected to artificial satellites once it was realized the Moon was not a practical base of operations for viable space based weapons, hence no more Moon shots, the Moon rocks were just a diversion & USAF-SAC/NASA public affairs media ploy to legitimize the "so called" benevolent Apollo Program. a good 30% of the Apollo Program debunking websites are actually USAF/NASA shills. There's a lot more to tell but that's for another time.

The Bible in certain interpretations prophecises WWIII by space based nuclear weapons in Revelations: 6:12-17

(13) And the stars of the Heavens fell unto the Earth

It is projected that just one air burst space mine will release so much gamma ray energy that it's flash (Over several thousand lumens brighter then the Soviet Tsar Bomba explosion which was the most powerful explosion in the history of nuclear power) enhanced by X-Rays will blind people even with their eyes closed.
Click to expand...

Got it, thanks for breaking it all down, makes sense the way you explained it. In terms of the scripture you cited, personally, I marvel at verse 15:


15 And the kings of the earth, and the great men, and the rich men, and the chief captains, and the mighty men, and every bondman, and every free man, hid themselves in the dens and in the rocks of the mountains;
https://www.biblegateway.com/passage/?search=Revelation+6:12-17&version=KJV
​
Earlier, I shared the dispensation of the Tribulation with NNQueen, its getting closer.

Arianne said:
Again could be a biblical interpretation of all the significant leaders of First world nation states & their critical support personnel & families would be relocated to classified nuclear blast hardened bunkers more then likely with a built in preplanned 6 month survival component, Raven Rock is a well known ploy, even our nuclear capable adversaries know that, as for the NORAD Cheyenne Mountain Complex no critical follow on civilian government personnel other then already in place employees would go there, fact is Russia probably has a whole brace of ICBM's targeting it & it would be a distant memory within the first wave of nuclear counterforce missile strikes. Bottom line, Continuity of government relocation bunkers are now & will always be classified because if not, the Russians & even the Chinese can have the coordinates preprogramed into their nuclear missile warhead GPS packages, or their satellites can visually track high value targets leaving Washington DC & electronically retarget their ICBM's to hit those assets just before launch which can deliver their land based ICBM payloads within 28 minutes,7 to 9 minutes of it's a SSBN SLBM depressed trajectory launch just off the coast of North America. 90 to 120 seconds if it's one of the new SSBN SLCM's launched off the coast, that offers absolutely zero warning & all anyone "no matter who they are" can just drop to their knees & pray for the survivors that's left to bury the dead.
Click to expand...

Thanks mon ami, I thoroughly enjoyed reading your mindset on all of this, but respectfully, let me exit this Lane and get back in my Lanes, lol.

So that you'll know this is move is genuine, here's my status from my Profile Page:


...Boxall said these rogue waves could reach 100 feet tall. That would be on par with the largest wave ever recorded: A 100-foot tsunami triggered by an earthquake and landslide in Alaska’s Lituya Bay in 1958, the Smithsonian reported.