Liberia : Meet The Multi-millionaire Who Wants To Be President Of Liberia replacing Ellen Johnson Sirleaf

...
Why Africa owes a debt of gratitude to Ellen Johnson Sirleaf
Chude Jideonwo, Special for CNN 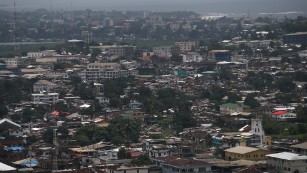 Symbol of America said:
A Black Trump huh? There may be hope for Liberia yet since like Trump he is a businessman and as such he has no political agenda wallowing in corruption like Sirleaf. I hope he runs Chevron out of Liberia but that may be a hard nut to crack since the Madam took hundreds of thousands in bribes to allow Chevron to unilaterally pick the most promising offshore oil tracts before even the African oil interest could put official bids in. If you're going to sell your soul and your own people out use your imagination and make it worth your while and not settle for pennies on the dollar making your confederates know you are as stupid as you look. Shame she didn't hold out for more, if you're gonna steal, steal big.
Click to expand...

The soccer hero, Weah, is currently in the lead.

Symbol of America said:
I believe George Weah could turn Liberia around. He is much more astute then most people give him credit for, I hope he empties the existing cabinet out and chooses their replacements wisely. I also believe the Madam planned to have him assassinated during the 2005 runoff but he was and still is way too popular for the masses to stand for that and she would been on the receiving end of a violent bloodletting. Thanks for the update Clyde.
Click to expand...

Not a problem Symbol of America, no, not at all, you are very welcome (yvw) ...

My hope is that one day, Liberia can be restored with governance, the extent to which, repatriation from America, for those that think like me, would be suitable. It would be a fittingly first stop.

... As of Monday, out of a field of 20, the top vote getters were George Weah’s Congress for Democratic Change leading with 39 percent of total votes cast, trailed by Joseph Boakai’s Unity Party with 29.7 percent ...