Look at MS WISCONSIN Strut her Stuff! & …Nicki too!

This is just one of the beautiful young women that will be competing for the Miss USA crown this upcoming June 12, 2011 and although, I‘d like to watch it, I seem to always forget win it actually airs, and lately, I seem to have a short attention span for television these days. At any rate, hopefully the man behind this pageant can now stop his craziness against with regards to politics and, what I think was a bunch of trickery anyway, and get back to promoting these beauties. I wish the best for all the girls and especially Ms. Colorado as her story of her losing her home has become a prevalent issue now. For me, it’s pretty cool to see these some of these African American beauties get exposure because, as we all should know, it was not this way a while back with regards to these pageants. What I so loved about Miss Wisconsin was her fierce strut in the Miss Wisconsin USA pageant, the competition that got her the crown! Yes! I wish I had long legs like that…well, anyway… When I saw this short blog, it also reminded me of an awesome 2008 film called, Rain, about a young girl, named Rain, played by a cute young actress Renel Brown, who lived on the islands of the Bahamas. It is about how, after her grandmother died, she was sent to live with her mother, and how she dealt with the conflicts that arose.

What got me about this story is that Rain’s mother, Gloria, played by the actress, Nicki Micheaux, was dealing with drug addition and living in a poverty stricken area dubbed, the Graveyard, but she was a young mother. It seems so real too, how young Black women are made to grow up too fast and faced with motherhood probably before they even know how to just be young girls first. Even though the mother obviously wanted the best for her little girl, she had to deal with so many issues in her life, of which I can really understand. It was as if she had to grow up right in front of her child. It was gripping. Although, I’ve never seen the actress Nicki Micheaux before in any films, in this film, Man!--She worked that walk out! I love her accent, and it reminds me so much of some of my relatives and friends in Charleston, South Carolina! Anyway, I loved the music in this film too, and one of my favorite parts was when Nicki Micheaux strutted her stuff, amidst the back drop of the island scenes as the music was playing. This movie was so awesome and I hope that it was beneficial for the purpose it was said to have been made. Anyway, here are some pictures and brief blogs of the actresses in the film, Rain, and Miss Wisconsin: 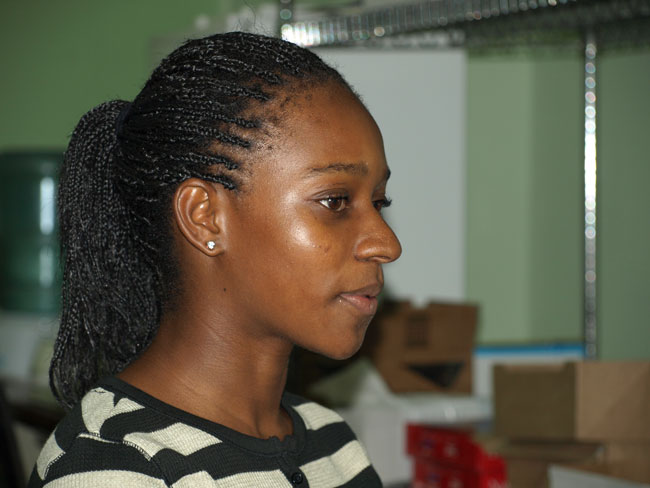 Me thinks this is a good post! It's kinda kool to support some sistas, young sistas, older sistas...sistas...! 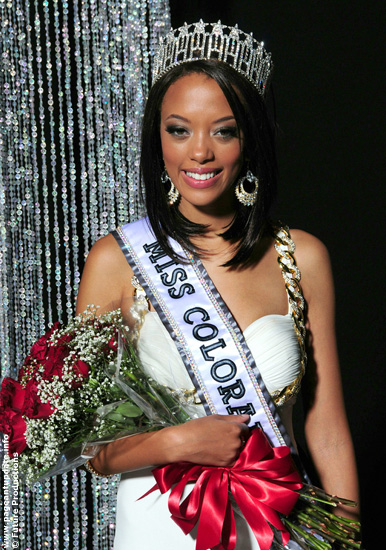 Personally, I'm not a fan of Miss "Anything" America. This country's' standard of beauty is based on too much physical and/or material, with the white standard of beauty being the ruler. Case in point, dark skin blacks.
The sister is beautiful. But the title she wears, for me, tarnishes her luster.

I don't know what happened to my picture of Nicki Micheaux! I posted it, and checked it and today, it is gone! So, I have another one. I really like this one, because I like her hair do. And here's some more information about the film, Rain. The director is, Maria Govan. The other known actress pictured here with Renel Brown is, CCH Pounder. Renel Brown, the young actress, really does run track! I love to see the Olympics for this reason; the women's track and field and to see our american team, Jamaica and the Bahama team put it down!--Those girls can go! Plus, it makes me want to get up from this computer and work out. They make me feel like I can do it!--get fit and healthy.

Renel Brown (Rain)
Rain is Renel Brown's first film. She is a native of New Providence, Nassau, where she lives with her mother, father, sister and four brothers. She attends S.C. McPherson Junior High and loves arts, crafts, singing, and dancing. She is on her school's running team and has just competed in the island's International Sports Day. Renel looks forward to continuing acting after the enlightening and overwhelming experience of playing the title role in Rain, which she describes as, "the best thing that's ever happened to me." ...

Kamau47 said:
Personally, I'm not a fan of Miss "Anything" America. This country's' standard of beauty is based on too much physical and/or material, with the white standard of beauty being the ruler. Case in point, dark skin blacks.
The sister is beautiful. But the title she wears, for me, tarnishes her luster.
Click to expand...

I understand where you are coming from.

They are young though, and I hope that things will get even better as a whole for us and not be sucked into the white standard of beauty as being the ruler.

Log in
Similar threads
Black People Politics : jill-stein-recount-wisconsin-pennsylvania
Health and Wellness : CDC: DEADLY OUTBREAK IN WISCONSIN
Black People Politics : Black Wisconsin Sherrif Passionately Defends Bill Of Rights
Black People Politics : ‘White Privilege’ lesson in Wisconsin high school draws national attention
Black People : Sikh temple shooting in Wisconsin, another staged event?
Black People : UPDATE: Miss Wisconsin USA has dropped out of the pageant!
Black Poetry : OK she strut butt and stay up with luck she's a RED BONE and boys kiss her and head home because of her skin tone this boy has a TOYOTA with hype he
Black Poetry : Have pride like URKEL and can divide a circle into three equal parts there's a knife in legal art wow cut myself looking at a girl strut butt deft boo
Black Poetry : while you strut mad silk softly I add milk to my coffee take brisk sips and kiss your lips flow rhym
Black Poetry : Look his pride talk and like sidewalks it abuts on streets see a girl that strut sweet use cosmetics
Black Poetry : SHE SAID” “In the club strut butt and rush to thrill i can crush a pill between two spoons while
Black Poetry : SHE SAID” “In the club strut butt and rush to thrill i can crush a pill between Two spoons while a b
Black Entertainment : The Meters - Cissy Strut
Black People Politics : ‘Purely outlandish stuff’: Trump’s legal machine grinds to a halt
Black Poetry : This stuff hot and pure but not sure thisIs the right stuff, flow galore go kissGo shore and reminisce like ships onCrack he’s in all type of shock
Black Poetry : Prevail with chemistry and like a retail shoe industrythis stuff abuzz with talks of a new ministrythat's a big boom aheadwhile you in the room li
Black Poetry : She was so not gonna do this but after a true kiss stuff happen he huff and puff while rapping and jest got her tongue wanted breasts and some, w
Black Poetry : this stuff strong and crazy, it move heavy weightsAnd make them very straight, and cause merry datesWith chicks but have to inflate my tricks pair o
Black Poetry : Walk around on the street dizzy have to keep busy my girl name Lizzy stuff in life no doubt double but his duty is to stay out of trouble see a girl “
Black Poetry : “This is all chocolate but like a small rocket this stuff will take off had enough girl your cake is soft give me a break let me toss some words in yo
Black Poetry : Fun today flirt And one may work With love talk alert try get under her skirt Must slow down with the twerk Stuff expressed by her complex breast Sh
Black Poetry : HE SAID: “This stuff smack lions and attract iron like a magnet right my dew rag wet hair growing wi
Black Poetry : HE SAID: “This stuff smack lions and attract iron like a magnet right my dew rag wet hair growing w
Black Poetry : I'm a wet one here to get stuff done boys wanna huff and puff be alert
Black Poetry : love is tender starting with perfume like a kindergarten room it teach stuff and reach ruff lessens
Black Poetry : This stuff is digital up to snuff and visible which mean it can be seen, where your contact lens? f
Black Poetry : been in nations where inflation grew enough to do stuff Increase in prices scuff The market not up t
Black Poetry : been in nations where inflation grew enough to do stuff to the buying power of the dollar took a sho
Black People Politics : This Is The Stuff That Starts Wars
Black Poetry : my stats suggest at best that I like to write all type of stuff //
Black Poetry : STUFF HARD
Food Discussion : You're eating a lot of fake, rotten olive oil — here's how to find the real stuff
Black People Politics : Stupid stuff people say or Stuff stupid people say...
Black Entertainment : Raven-Symone’s Dad Rips Her for Saying ‘Dumb Stuff!’
Black Sports : KD : "S. A. Smith lies and makes stuff up"
Black People Politics : Jeb Bush Says Unlike Others, He Won’t Give African Americans ‘Free Stuff’
Black Poetry : doing stuff
Black People : Stuff you do you would not recommend to others.
Black Poetry : Can't Get Enough of Your Stuff
Black Poetry : Advance with rhymes experience romance sometime stuff Promote knowledge went and spoke at college ha
Audio Video Web Conferencing : Stuff Black Parents Say
Poetry Discussion : Why do women write poetry centered around this "poor me" pity me" oh please, help me, type of stuff?
Black Entertainment : lauryn hill….new stuff
Black Positive People : Books on "Black Stuff, Politics, History, Philosophy"
Black People : Black Folk Gett'n Outrageous - Daring to Present Diverse Opinions On Stuff!
Black Poetry : Clutter microphones when I utter in tones stuff butter
Black People Politics : Romney : If Black People Want Free Stuff, They Need to Vote for Obama
Computers - Software Hardware : Best Of Software List - Stuff For Everybody
Black People Politics : Stuff They Don't Want You To Know- The Black Panthers And The U.s. Government
Black People : "I'm gonna make stuff up" said a seattle cop to man under arrest.
Share:
Facebook Twitter Reddit Pinterest Tumblr WhatsApp Email Share Link 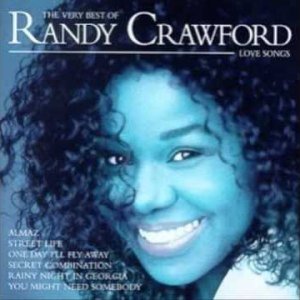