A grandfather sits his grandson down one day to explain to him about the forces of good and evil in the world and how they compete for dominance. He tells him about the good wolf and the bad wolf and how they are always fighting with each other for control.
The grandson, ever so eager to hear his grandfather's stories as usual sits down on his grandfathers knee and listens intently as the old man begins to speak. The grandfather tells him about the bad wolf and how he reigns in the darkness, perpetuating the evil and the wickedness that dwells in the hearts of men. He speaks about the history of epic wars and battles that have been launched against peaceful nations for the acquisition of territories and dominance and imposition of ideologies. He speaks about the savagery and the cruelty that men of the bad wolf commit against other men, women and children in the name of religion and man's self-proclaimed doctrines. He tells him how the bad wolf annihilates entire civilizations because of man's voracious and insatiable appetite for wealth and power..

He then speaks of the good wolf. He tells him about the honor, the valor , the integrity and the courage of those who engage in battle to fight against these forces of evil. He speaks of the majestic and overwhelming desire of honorable and benevolent people whose hearts beckon them to reach out to those whom are less fortunate and defend them. People who will risk their lives to journey into places of peril so that they may assist those who've been victimized and now suffer due to the brutality and indifference of life by evil people of the bad wolf.. He tells him about all the great men and women of peace who have either perished or whose lives were taken so abruptly by the evil men of this world because they yearned for a time of tranquility, peace and harmony.

The grandson listens, his eyes wide open with complete astounded amazement. He can't believe what his ears are hearing. Surely his grandfather is just weaving a tale to entertain and frighten him. But his grandfather is speaking to him this time with an unfamiliar look of sternness. The grandson has this look of bewilderment and confusion on his face. He's trying very hard to understand exactly what the old man is saying and what it means but he can't quite put it all together. As the old man continues to speak the grandson interrupts him and says, Excuse me grandpa but I don't understand about these forces of good and evil. Where are they grandpa? Can I see them?

The grandfather looks at the child, puts his hand to his chin as he studies him very intently for a while. Then the grandfather says; well my son, you can always see them in the deeds of other people and perhaps you may even feel them inside you and around you. Inside everyone there exists a good wolf and a bad wolf and both of them fight for power. Sometimes the bad wolf will try to force us to do things that we know aren't right and sometimes the good wolf will try to standup against the bad wolf's intentions. So we must be very careful my son. The grandson looks at his grandfather and says, you mean I have a good wolf and bad wolf inside of me grandpa? The grandfather replies, yes my son you do, we all do. The good wolf wants to be strong and be a protector and the bad wolf wants to destroy all that is good. The grandson ponders for a moment and looks at himself, then he stares deep into his grandfather's eyes and asks, which wolf will I be grandpa? The grandfather then replies,
THE ONE YOU FEED THE MOST MY SON!!!! The one you feed the most...But you're a good kid so; you don't have to worry too much about it. Just be careful about those people who have the bad wolf inside of them....


There exists inside of all of us these forces of good and evil that are continuously vying for power. The side that will dominate our lives is the side which gets fed the most.

We are all endowed with certain unique qualities and gifts which were intended to be developed and shared for the betterment of humanity. We are no doubt driven by certain forces which cause us to misdirect our energy towards the destruction of ourselves, one another and our environments.

The question is why and how do we conquer the evil? I believe that we will never fully conquer evil. Evil exists because good exists and vice versa. One can not be without the other. We can however, give more attention to the good and by doing so, there will be less evil to battle!

We are expected by the conveyors of life to be the benefactors of that which we are the beneficiaries of. We have been entrusted with this sacred gift of life to impart knowledge and instruction in order for us to flourish, produce and maintain longevity. Unfortunately this is esoteric and most will not grow to realize their potential in life due to neglect and indifference. We have fallen way short of the mark....There will for an eternity be battles and wars to be fought. Conflicts will always exist. Humankind and all forms of life will continue to strive for survival as long as there is life. And there will always be the forces of good and evil vying for power and dominance.

So the question is----which wolf will dominate your life?

Which one will you feed the most?

A Life Lesson:
IN THE ABSENCE OF KNOWLEDGE AND UNDERSTANDING, IGNORANCE WILL PREVAIL...

beautiful story. loved the way you brought it all together. however, i do have one question: do you truly believe you cannot have good without evil?

being a believer of the bible, and having faith in my God, i believe in that time when evil doers will be destroyed...and good will reign, forever. believing as i do, i cannot believe in your statement: "...THERE WILL FOR AN ETERNITY BE BATTLES AND WARS TO BE FOUGHT. CONFLICTS WILL ALWAYS EXIST."

That's just a side note. I thought your story was very well written. We should all strive to teach our kids, and grandkids, such life lessons.

baller said:
beautiful story. loved the way you brought it all together. however, i do have one question: do you truly believe you cannot have good without evil?

being a believer of the bible, and having faith in my God, i believe in that time when evil doers will be destroyed...and good will reign, forever. believing as i do, i cannot believe in your statement: "...THERE WILL FOR AN ETERNITY BE BATTLES AND WARS TO BE FOUGHT. CONFLICTS WILL ALWAYS EXIST."

That's just a side note. I thought your story was very well written. We should all strive to teach our kids, and grandkids, such life lessons.

I'm glad you enjoyed the read. Yes I do believe that evil will always exist. It is in the hearts of men and a trait that can not be extinguished. If not for the devil, there would be no need for God. One will always need the other. Otherwise there's is no place for the other....It is the science of balance. Right versus Wrong, Positive versus Negative We add and We subtract. History has shown us that there always has to be tragedy or some loss of life for good to surface...It's unfortunate...( The Crucifixion of Jesus ). You are entitled to your beliefs and your faith... I am not about to step on that....Thank you for the read and comments...They are appreciated....Note: I would like nothing more than to have a world where evil does not exist, and we could live in Peace and Harmony... I just don't believe that it will be on Earth.....There is just too much envy, jealousy and evil lurking in the hearts of humankind....The bible explains that all too well....Also I would add. Haven't you ever found yourself sometimes struggling with something that goes against your conscious? When it does happen, I'm sure you fall back on your faith to pull you through that moment.....That's the good wolf versus the bad wolf. Everyone does not always make the right decision though....Hence the need for forgiveness and salvation....
Last edited: Jul 6, 2015

oh, i agree with the ying and yang mentality, in today's life. but that's not the life i speak of. however, like you, i'm not here to convert anyone to my way of thinking. in today's life, there is a struggle between good and bad...and, too often, bad wins out. unfortunately.

Black Short Stories : "The Coldest Winter Ever: Life After Death" 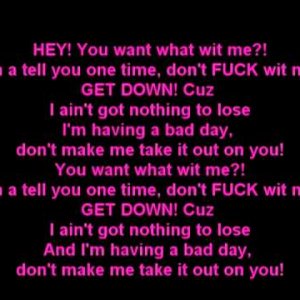