Black Entertainment : Is this clown for real??

Is that a question to someone?

I agree, Hollywood always loves that type of negro. Actually, Hollywood avoids anything else.
F

kente417mojo said:
I've always wondered the same thing. How does getting shot 9 times make you hard? All that says is you were slippin' and somebody got the drop on you. 50-Cent is a snitch. He's a clown and he's the white man's whore. Rap is a joke. All there is are black youths "acting" like gangsters and perpatrating an image. Then they get well-known and head straight to hollywood. These people are actors. The are acting from the very moment they release their first single. They're acting everytime they get a headline and their goal is to take their acting skills to the big screen, so they can really rake in the big money from the many stupid people that are willing to pay and see them sell-out.
Click to expand...

i mean when i heard he got shot nine times i was like that aint gangsta, you were slipping

hes the reason people say rap is dead. It was weird the other day my friend brandon was like what are you listening to i said Big L, he said fifty cent is better, i asked why? he said cause L wasnt no gangsta like fifty, and i said, yeah l aint "gangsta" cause he didnt get shot nine times?
P

When you take certain things into consideration...

wants to make niceee with the people(bush) who are bent on murding the entire afrikan peoples world wide..... class can you say house negrow - Therious
Click to expand...

He's also spoke out against a comment made by Dead Prez after 9-11, when they said they didn't feel sorry for America. To speak out against Kanye and Dead Prez just proves that he's some white man's pin cushion. - Kente
Click to expand...

Ja may be a phony gansta as rap act but he ain't no sell out. He recognize Minister Farrakhan as an elder and sat that with him to squash the beef between him and 5o.

But what Farrakhan had in mind was much broader message than Ja and 50 he wanted to send a message to our artists. 50 shunned the meeting. - Akillies
Click to expand...

50 is a straight up sell out...All the quoted above just proves how disloyal he is to his people.

"All these fake thugs no the deal/ when we start the revolution, all they'll probably do it squeal" - Nas

(What) and if you don't already know
All these Uncle Tom @ss kissin n!ggas gotta go - Dead Prez
D

LOL, somebody called 50Cent the white man's whore! That is good! I just think the guy is running out of things to say and that he needs to cool it. He's oversaturating us by being so much in the public eye. He needs to be on hiatus for a little while, and think about a new way to hit the public because this thing with him always being confrontational is getting old.

I don't know how to take Kanye West, I think he could have possibly said what he said to sell more records. These public figures in my eyes are suspect, I think people are only fooling themselves to think that the rich and wealthy care the slightest bit about what happens to the poorer majority.

Deepvoice said:
I don't know how to take Kanye West, I think he could have possibly said what he said to sell more records. These public figures in my eyes are suspect, I think people are only fooling themselves to think that the rich and wealthy care the slightest bit about what happens to the poorer majority.
Click to expand...

I agree, Kanye West is in no way a leader just becuse of one comment that he made. My point is, even if Kanye did it for publicity (which is more likely than anything else, since his album was released shortly afterwards), the message was sent. Everyone heard it, whether he really felt that way or not. It still was needed. For 50-Cent speak against what he said is stupid. I can care less if he attacks Kanye, but don't attack what he said because at that moment he was speaking nothing but truth. I can't stand how much publicity 50 is getting too. If people don't realize white folks love seeing the worst representation of black folks, here is all the proof you need. They are promoting his rediculous, ignorant film, more than they're promoting their own white films. That shows you right there that their #1 priority is destroying the image of the black man and woman, even if it means ignoring their own for the meantime.

Black Entertainment : Can You Truly Give Props To The Real Black Panthers Of The Sixties? 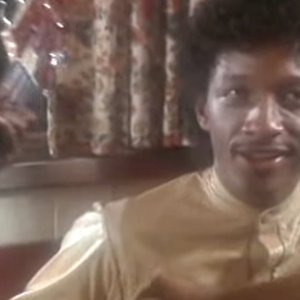