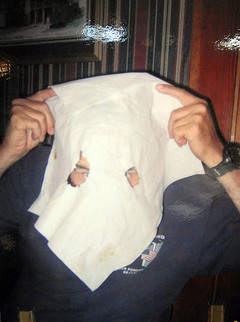 The cops say this is a picture of Lt. Angelo Andriani wearing a mock Ku Klux Klan hood he made out of a napkin.​

The cops - all Hispanic - say Lt. Angelo Andriani intimidated and harassed them, even threatening their lives, with his racist language and behavior. They say he put on a mock Ku Klux Klan hood he'd made out of a napkin during a trip to Louisiana in 2005 in the aftermath of Hurricane Katrina. And when asked why he thought he could get away with such behavior, the lawsuit says, the lieutenant reportedly replied: "the Chief of Police (Carmen LaBruno) was God and he was the son of God."

They say he also frequently dropped the "n-word," said white women who dated black men were "pigs" and that "the white race was superior to other races" and "the white race was destined to rule and dominate others." The suit also claims he sent several emails to a councilwoman in Kenner, Louisiana - where Andriani and other Hoboken cops had gone after Katrina to help with clean-up efforts - mocking the prosecution of the Jena 6 and included three lines of text that each started with an oversized uppercase "K."

They say he also forced cops to do manual labor at his home between 2004 and 2006, acting like "a Southern plantation owner overseeing his slaves" by ordering cops to his Verona home for "special assignments" - like building a deck, cleaning out his garage and raking leaves. 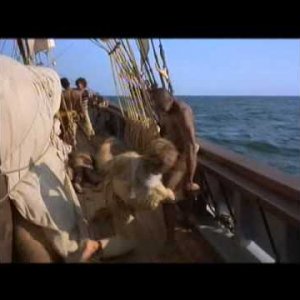