robboy2003 said:
Sista read this! If you are a Black Woman,I luv you! Hell, if your a dude i got luv for ya!

This is what was said to me,and is in no way how i feel. I'm a black man,that has a full blooded cherekee grand ma,so you know i got the cheekbones and red skin! I married and absolutely love a woman mixed with black foot.

There you have it. We are Black each of us and loving it. Now all we have to do is love each other in all of our shades of Black!

I love the Word,and love all Black!

True indeed.
I luv you as well.
Always have and always will me and mine.
R

Who are you and where is the Riada who used to post here?

Claiming black men have some sexual fetish causing them to be super-aroused sexually at the sight of white women!

This sounds like a jim-crow apologist concocting pseudo-scientific racist theories to justify their own insecurities.

It also reminds me of the white teacher who accused a 4-year-old black boy of sexual harrassment....what does it say about YOU if you're inclined to even make this stuff up?

SMH...OK, I'm officially divorced from taking your posts on this topic seriously....

You had me fooled there for a second.
Click to expand...

Kemetkind, without getting very personal, I can tell you I've experienced this myself with men fawning over my complexion and telling me how pretty my skin shade is. They especially like the lighter parts of my body that the sun doesn't darken. A compliment is one thing, but when I analyze the reason for the compliment, it can get pretty disgusting. Hell, it's just skin just like any other woman's. So, it's not just white skin; it's also light brown skin and lighter skin that SOME Black men go ga-ga over. I wish you were able to be a Black woman for a month. You would do a 180.

So, I've come to the conclusion that it's a fetish just like any other fetish.

Mad Skillz said:
"Racial Types
Though Ethiopians are generally Negroid in pigmentation and hair type, their Caucasoid (Mediterranean) accretions are evident in their cranial and facial morphology, which distinguishes them from pure West African Negroids.

Why submit only half the article? The other half you conveniently left out states "in addition some anthropologist have argued that their craniofacial features resemble those of Caucasoids (terms not usually used by scientist today) are not explained by admixture because there is none. Scientist believe that modern humans originated in Africa, and that all non-Africans carry a later mutation that occured in what is today known as Ethiopia. The man who first carried this mutation is known as the Eurasian Adam, and lived in what is today Ethiopia."
http://en.wikipedia.org/wiki/Multiracial


I apologize, Destee. But anyone who deliberately chops up articles to serve their purpose and uses references from Passarino, a known fraud, and Carleton S. Coon a known fraud and a self-proclaimed white supremacist, has credibility issues. I hate dishonesty. How can anyone seriously engage in honest dialogue with someone who fronts like this? Cut and paste from a portion of 'sources' without providing a direct link nor understanding who these degenerates are does a diservice to people who might want to learn the truth. Even clueless amateurs know Passarino and Coon are crackpots that aren't taken seriously by accredited intellectuals let alone their peers. You can routinely find their 'work' in places such as Stormfront, Sons of the Confederate Veterans and the local trailer park venue. So if I appear hostile this is why. I thought this thread would pertain reasonable dialogue regarding the natural diversity of African populations yet it turned out to be nothing more than a cesspool of disinformation and an insecurity outlet for women who believe Black men desire non-Black or Ethiopian women with "european features."

Hon, your little pot shots don't sway me, I've looked the devil in the eye and lived to tell about it, now I've asked you for a list of your sources oh 'enlightened one' but you refuse to provide it, instead you try to circumvent the issue by making assumptions about my motives and my character. I assume you don't read Arabic language that's fine, i will spoon feedyou like the child i never had with my other sources.....

There is documented evidence that show trade between Arabs and Ethiopia via the Mediterranean ocean, between the 7th and 8th century; the Portuguese came in to Ethiopia in the 15th century. Shame on you oh 'enlightened one'
for not being aware of this in your extensive research.

Now since this is a white man and before you start your racist crap, i will give alittle background on him..... he was a scholar WHO PUT HIS REPUTATION ON THE LINE IN 1700'S ( you know how especially racist the french were rigth?) by telling white people the REAL history and the significance of African and his peoples, he was one in many WHITE MEN who gave credit were it was due; he basically said; if it wasn't for the advancement of Africa, the European Continent will not be what it was then, but oh 'enlightened' one do not trust he word of a mare motal, read the book your self bro!

Now, how many people do you know including BLACK MEN that would put their reputation not to mention thier lives on the line to speak the truth? uh? how many? my experience NONE! and i have a feel you are one of them.

Im sure when and if you do your research, you will find that your president, Thomas Jefferson was involved in the translation from french to English, so just to let you know? i have one of the ORIGINAL french versions; given to me by my grandfather, a BLACK SCHOLAR along with many many artifacts, original texts and works that you have not even heard of! that white people would love to get their grubby little hands on so they can lock it up in museums and private collections only letting bits and pieces out to feed half baked notions like yours! but, i digress...
Robin Walker: When we Ruled this is a gentleman is of Jamaican ancestry ( i believe) born in London, so his black. do you feel better? oh wait maybe he is a black racist!

NONE of these works show any form of evidence to support, your theory that PRE-COLONIAL AFRICANS AS BEEN LIGHT SKINNED WITH STRAIGHT or WAVY HAIR!

I am going to take this a step further because frankly i have had with our crap, and if i get banned oh well.... i have sooooooo much on my mind right now, NAMELY the 250 Nigerians that GOT BURNT TO DEATH at the oil refinery accident due to greedy Europeans and a corrupt government........
I thinks that you are enthralled with light skinned period, women, men, i don't know your preference and i don't care, and i think you fake like your like you are sooooooo Afrocentric, but in actuality you are not. I won't be surprised if i looked into your past, i will find that you were probably like the African Americans i went to school with, who crack ignorant jokes about a continent they came from; but have no knowledge, i believe since it is now fashionable to be 'African' you are know jumping on the band wagon, but bro, i see you your true nature
It is sad, i offered to share my legacy with you ( DO YOU HAVE ANY IDEA HOW MUCH MY GRANDFATHER WAS RESPECTED IN HIS COMMUNITY? DO YOU) but do you respond? nooooo, you would rather throw put shots at me, when Black American asks themselves 'why can't we unite' look in the mirror; people like you are the problem.
Sir, I am done, i throw down my gauntlet, dissect and mangle my words as you please. STAY IN YOUR PSEUDO 'LIGHT' AND I WILL DWELL IN MY 'DARKNESS'
Namaste

Yet still, I shall continue to claim and HONOR my own ETHIOPIAN heritage before I shall refer myself as any type of "American".

I'm sure, my brother that you most likely also KNOW the statement that is being made when a Black woman comes on this site and posts this kind of mis-information from someone named COON!

so, you are now calling your self Ethiopian?... yeah.. i only have acouple of words for you...please change your name from Omowale to Eshu it would be much more appropiate.

Yeah.... Im really scratching my head, trying to see how you fit in this whole equation;because given your name, i will assume that you follow the religion of ancient kemet ( if I am wrong in my assertions please correct me) so, From what i know of Ra Un Nefer Amen's work he dose not give credence to the concept of light skinned and wavy hair Africans, as a matter of fact he dose not addresse the issue at all; the religion of ancient kemet, shows no proof of this theory either.

The legend of Osiris and Isis states: a black man (Osiris) had to be put back together by black woman ( Isis) After his body parts was cut in 14 pieces (black people) by his brother Seth (ALL oppressors, lies) and scatered all over the earth. she found 13 pieces but was missing a part ( the truth)Osiris lived briefly( Africa) but died and was sent to the under world( the current state of Africa and black people) The only way for Osiris to be resurrected is for Isis to find the missing piece( the truth) The Aquarian Age is nearing( the age of truth and discovery) so Isis ( black women) will find the missing piece 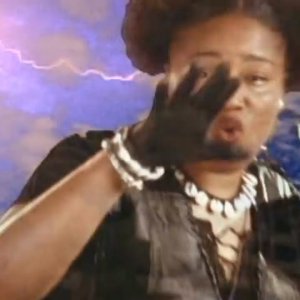